5 STARS *****
The birds are singing, the outside world is a jungle, but we have the best news of 2021: Gretchen Parlato is back.
» read article (french)

The birds are singing, it's seven in the morning, Los Angeles is stretching limply. Behind the screen, a terrace, a small wooden house that we guess cozy, and a familiar face. The last time we saw her, it was in the whirlwind of the early 2010s. Gretchen Parlato, the muse of all New York, the one who in a breath could reinvent Herbie Hancock's “Butterfly” (return to the version of “Live In NYC” just for fun), co-produce a record with Robert Glasper and play ping-pong with Esperanza Spalding to a tune by Jobim. Her slightly nasal timbre, her sophisticated voice although perfectly naked, openly seductive, made it sound: finally a credible alternative to prior singers like Stacey Kent! It was ten years ago. Four albums, tours, a hell of a dose of hype and then ... nothing.

"I didn't know how much my life was going to change, but from the day I got pregnant I knew I had to take some time." First in New Jersey, then in California with drummer Mark Guiliana and their child. Seen from France, Parlato had completely disappeared from radar. In fact, she never gave up. Just took some time.

Flor, the title of her new album, is a metaphor for this gentle rebirth, initiated by a former college friend from São Paulo, guitarist Marcel Camargo. Far from the East Coast urgency, the strings have taken the place of the keyboards, the mood has changed, Parlato beats a different tempo. It is barefoot that she unveils her new repertoire at the 2019 Montreal Festival, in front of an audience sincerely moved to find her again. "Magnus," a childishly innocent song the old Gretchen couldn't have afforded.

But Flor, a record haunted by Bossa-Nova and her childhood memories of Bobby McFerrin, "the one who made me want to push my voice and sing more complex lines, like a real instrument", does not completely turn her back to New York. We meet a superb “Roy Allan” by Roy Hargrove, blossoming in samba, punctuated by the brilliant Airto Moreira. “I have fond memories of Roy when he performed this track at the Jazz Gallery with his big band. An incredible guy”.

Stranded in Los Angeles while waiting for a possible new tour, Gretchen is already working on the sequel: "The idea would be to go back to the studio soon enough. There are projects on the table, a “Flor” volume two, a duet with my great friend Lionel Loueke or even, the most obvious things being generally before your eyes, an album with Mark, my husband ”.

The birds are singing, the world outside is a jungle, but we have the best news of 2021: Gretchen Parlato is back. 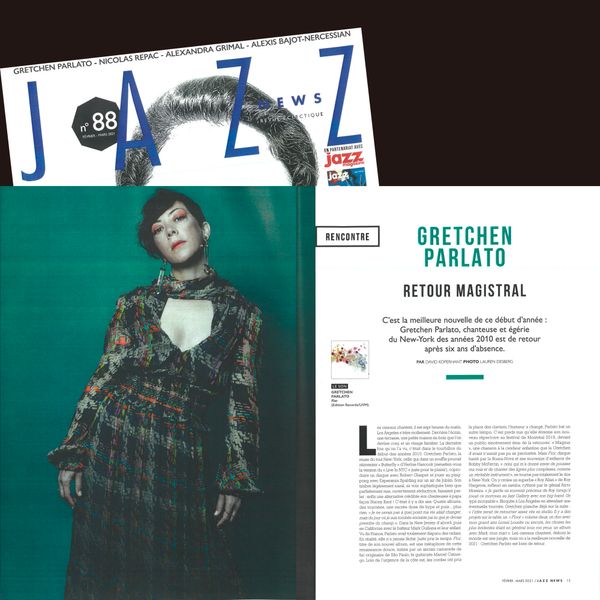