Nine Women In The Room: A Jazz Musicians’ Roundtable 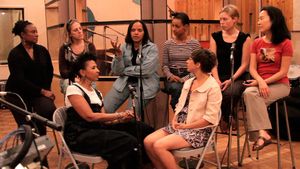 You may have noticed they're all women. That was both the point of the session -- and not the point.

After a full day of recording, eight of the musicians sat down with Lara Pellegrinelli for a conversation on the topic of women in jazz. They shared some of their own experiences and discussed the media, the  music business, audience, mentors, and role models. But Carrington eventually broke in with a request: could they stop talking about gender issues and talk about the music?

The conversation illustrates some of the tensions in being a woman in jazz. At the same time that these players seem ready to celebrate the obstacles they've overcome, they say that the music itself comes first -- it doesn't care if you're black or white, young or old, male or female. Could it be that this conviction, central to jazz, has made it difficult for women to speak up about the prejudice they've faced, as much as it has given them the faith that they will be heard?

You can read an edited transcription of the full conversation here, or download a PDF by right-clicking this link and selecting 'save link as'.

Terri Lyne Carrington: Forever -- since I was 10 years old -- people have tried to put me in all-female situations. I've always shied away from all-female situations because I felt that the pool wasn't large enough to choose from, and that I wasn't going to do it 'just because.' Now the pool is larger and there are so many women I really enjoy playing with. It doesn't matter that they're women and I thought, now's the time to do what people have been asking for.

Esperanza Spalding: Today, it's not an oddity to see women doing almost anything. So all I would offer in terms of the question ... 'What can the media do?', is maybe be more inclusive and accept the real landscape that's here. It's not like, 'Wow, it's so special that you play that. What's that like?' [If you said,] 'Wow, you're a woman and you play classical music. What's that like?', people would go, 'Huh?' Who cares about that angle anymore. And maybe we'll automatically need to go to a deeper level in terms of investigating this person's art.

Gretchen Parlato: As a singer, my experience is very different than instrumentalists. Because for singers, we've had female role models forever. So, I don't have the same experiences. For me, it's more the singer's role. What can you do outside of that box? But no one ever asks me about the fact that I'm a woman.

Helen Sung: People like to work with people they know and feel comfortable around. Chances are that a guy is going to feel more comfortable with his buddy. Somebody said to me once, 'Helen, if you want that chair, you're going to have to be twice as good as your male counterpoint.'

Geri Allen: I remember when I was in high school in Detroit -- I went to Cass Tech -- and at the time [pianist] Terry Pollard was playing with [vibraphonist] Terry Gibbs and I got to see her at the Masonic Temple. That was a breakthrough moment for me because certainly I was playing jazz and had been embraced by the musicians on the scene -- [trumpeter] Marcus Belgrave and musicians like that. But then seeing her and how fierce she was. She commanded the bandstand in a way that I will never forget.

Nona Hendryx: At the time that I was a part of the group The Blue Bells and then Labelle, there were women who were writing songs: Carole King and a lot of women from the Brill Building. But as a girl group, you wore nice outfits and nice wigs and you sang. We were lucky in that we made the transition with the British Invasion with artists like the Beatles and the Rolling Stones who wrote their own music. We were managed by  [Vicki Wickham], who thought that women should have that as well. And that's how it happened. She said, "Can anybody in this group write a song?" And I said, "Well, I can write words." And we were encouraged. We were treated like a band -- not like a girl group -- and took off our gowns; took off our wigs; grew afros; put on our tie-dyed jeans and jumped up on stage instead of waving around going, 'Oooh-Ahhh.' And it was another woman influencing and supporting and mentoring women.

Tineke Postma: I am from the Netherlands and I studied here in 2002 at the Manhattan School of Music. I was so inspired by the scene here in New York because there were many more female players here than in Europe. I think it's still very hard to find great female musicians in Europe. You have a couple of them. But here in New York, it's much further developed. So New York can be a very good example for how it should be because in Europe, we're still not there yet.

Ingrid Jensen: I think the men are evolving, too, and that makes it easier. I see a younger generation of men who don't see white, black, purple, green, girl, boy. They just say, 'Man, I love your lines. Can you play on my record?' And I'm like, 'Ah, finally!' That took awhile, but it's really happening. It gives the art a chance now just to be what it is, rather than a girl's club, boy's club, or any of those silly things.