"It's More Than a Whisper": A Conversation With Gretchen Parlato 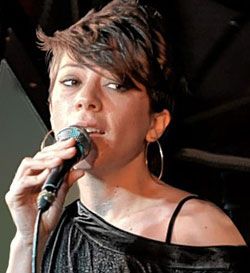 Los Angeles native Gretchen Parlato is among an elite group of musicians who made their breakthrough in Washington, D.C.: She was the winner of the 2004 Thelonious Monk International Jazz Competition for Vocals. Seven years and three albums later, Parlato is one of the most acclaimed and closely watched singers in jazz, and her star is still rising. Ahead of her two-night stand at Bohemian Caverns this weekend, Parlato talked to Washington City Paper about songwriting, playing with Terence Blanchard alums, and developing her unique sound.

Washington City Paper: On your new album, The Lost and Found, it seems you’ve branched out quite a bit in terms of composing your own material.

Gretchen Parlato: Yeah. That might be what allows this album to stand apart from the others. It just felt really good to release that.

WCP: Is it all new? Or something you’ve been working on for several years?

GP: A little bit of both. There are some songs that were composed specifically for this album, but there’s other songs and ideas that I’ve had for years that I just finished. I got in my own way for a long time in terms of finishing them—or in thinking that I could write at all.

WCP: Does that apply as well to the standards and other prewritten tunes that you’ve added lyrics to?

GP: Well, [Wayne Shorter’s] “Juju,” for example, those lyrics were the first attempt at writing that I ever tried. That was back in the Thelonious Monk Institute, so around 2001; the assignment from Terence Blanchard was specifically to write lyrics to “Juju.” And it was an assignment, so you kinda pretend you can do it even if you don’t know how. [Laughs] I said, “Okay, sure,” but I was terrified. And that’s what came out. So that was 10 years ago that I wrote that.

WCP: Is that an avenue you intend to pursue more fully?

GP: Yeah! There’s a handful of songs that have been composed by my friends and musical peers that are exquisite pieces of instrumental music that I hear words to—certain ones. It’d be a wonderful thing to collaborate with these other musicians.

GP: Well, it’s definitely true. I met Aaron through Terence, and Derrick, too; I met Kendrick before Terence, but right around the same time that he started playing with Terence. I think it’s just kind of how life is; just before I moved to New York I was in the Monk Institute, connected with Terence Blanchard since he was the Artistic Director, and was in touch with all these musicians because we had heard his band often. I think of it more as meant-to-be—that things just sort of happen, and you live your life in a certain pattern and you look back on it and think, “Oh, of course! This is why things are the way that they are.”

WCP: Did you meet Lionel through Terence?

GP: No, I met Lionel at the audition for the Monk Institute. Terence was there as a judge, so I guess there was a connection there, but he wasn’t a part of Terence’s band yet. We were students together.

WCP: It was a surprise to find that Lionel wasn’t on the new record. You and he are such a sympathetic musical partnership.

GP: We definitely are! But, well, as life would have it, he’s so busy I can’t even keep track of his schedule. He’s playing with everybody, mostly Herbie Hancock. So it was harder for us to find the time to connect, but in a good way, that makes it even more special when we’re allowed to play together. It’s also good in that it got me to connect with Taylor Eigsti and form a quartet that was piano-based.

WCP: So that quartet, is that going to be your touring band in D.C.?

GP: Yes, through next fall I’m with Taylor on piano and keyboards; Alan Hampton on bass, and he’ll also sing and play guitar so we can perform “Still,” the tune we wrote; and Kendrick Scott on drums—though specifically in D.C., the drummer is Mark Giuliana, who’s just awesome, and anyone who doesn’t know how awesome he is there’s lots of videos with live performances.

WCP: Alan and Taylor both have compositions on The Lost and Found, don’t they?

GP: Yeah. Taylor wrote a song, the last track, called “Without a Sound.” Well, it actually didn’t have a title. He wrote it for me, to write words to, for the album. I titled it after the lyrics were written. Alan’s piece “Still,” that again was just instrumental and written for me to sing.

WCP: You sound so different from just about anyone else in jazz. How did you develop that style?

GP: My father is a jazz bass player, so I grew up hearing him practice and going to his gigs, and his father’s a trumpet player and a singer. And my grandmother on my mother’s side, she always played records by Ella Fitzgerald, Sarah Vaughan, Nancy Wilson, and Frank Sinatra. So I grew up hearing jazz without knowing what it was.

But I think specifically that style you’re talking about, that’s understated and subtle, I think that just came out of hearing other singers do that. Like Bobby McFerrin. Like Joao Gilberto and bossa nova, and hearing that when I was really young and being completely moved and touched by the ability of these artists to draw you in, but without throwing the music at you. They have their palms up as an offering, and if you want to come into that world you’re welcome to, but it’s not forced upon you. It’s just the beauty of subtlety, of understatement, of something that is a quiet power, an intensity.

It’s also something that was just in my nature. I always say that if I had a voice that was a big belter, and I could sing like Aretha and do amazing ornaments and runs, I would. If that was my makeup I would do that. But it was a matter of learning what is the natural makeup of my instrument and my body, just accepting the voice that I have and learning what I could do with it. So there’s your very long answer! [laughs]

WCP: Were you aware going in that you had something original?

GP: No, I don’t think I ever thought of it that way. I grew up singing in choirs just like everybody else, and growing up with musical theater and imitation. I grew up on The Sound of Music and I wanted to be Julie Andrews when I was little. Or anything—it was the '80s, and I would sing along with Madonna and Whitney Houston. And before I found jazz I was singing in musicals, which is a kind of a belting tradition, and while I did do that to me it was like, “That’s a character when I do that. That’s not me singing, as an extension of how I speak.” I think that’s really the key. Singing shouldn’t sound like you’re trying to be anyone else.

I also like to challenge myself. I know that people often describe my singing as “whispering” and “hushed,” and I like that. I think there’s definitely an air surrounding my voice, but I believe it’s more than a whisper. In a whisper there’s no sound, no tone, and I try to reach the full capacity that I can. So I’m learning, let’s steer away from this breathy whisper, because if that’s all that people are hearing then they’re missing something.